If you ask about 4 million real hip hop fans in at least their mid 20’s onwards today what they did 15 years ago on the week of June 3 – 8, 1997, they would probably give you a detailed answer of what they did, a vivid description like it was only yesterday. I was most definitely one of those fans and I have my story. As the Golden Era of hip hop drew to a close about that time, another epic hip hop moment was created. The Wu-Tang Clan formed like Voltron to drop the double length opus, Wu-Tang Forever, and gained a new wave of fans into the hip hop genre by touring with Rage Against The Machine. Their Wu-emblem displayed on a global icon in the album cover was the Clan’s way of saying, “We’re taking over the hip hop game, and we gotta worldwide following”. When this album was originally reviewed, there were mixed responses. Some were saying a certified classic but cannot touch 36 Chambers, while others stated that ‘it was too much and they got over people’s heads, and they didn’t sound has amped, and as hungry as their debut’. But 15 years later into 2012, and we find that there is a renewed appreciation for this album among many others because of the state of hip hop today. So to coincide with Wu-Wednesday, RePPiN 4U revisits the ‘Double LP for Wu-Tang Clan’ and we will see if the original reviewers thoughts still remain.

‘Wu-Revolution’ was a controversial intro to the album, not your usual Kung-Fu sample into a frantic Wu-Banga to kick off the album, here you had Popa Wu speaking on the 5% and the Nation of the Gods and Earths. This got under people’s skin a bit in terms of their respective religions, and so this was often skipped by many. Wu-Tang wasn’t the first group to speak of the 5%, it was just that they hit the mainstream. But 15 years later it’s understood and appreciated a lot more. If the Wu-Tang’s earlier hints of Allah didn’t clock on to you in their earlier albums, it’s stated in black and white here.

‘Reunited’ was the intro that most fans were hoping for in the first place. Memorable verses here from all 4 clansmen involved, most notably Ol’Dirty Bastard, “Unglove the news, watch a n!**@ transfuse/Dirty add to the fuse, heavy at the booze/I don’t walk, I get carried/Gold and platinum frisbees on my wall looking properly/but come-ly…” afterwards RZA would show off his production with the violins, something not seen very often in today’s hip hop.

If there was anything I loved in Wu-tracks, it was the chanting of the Wu-Tang to get you amped. As the fans worldwide chant in unison, RZA, GZA, ODB & Meth would pass the mics like batons to Inspectah Deck, Masta Killa and Cappadonna in ‘For Heavens Sake’.

The Clan would carry on tradition as it were, and put a twist on their original C.R.E.A.M. track and say that ‘Cash Still Rules/Scary Hours’. The relay continues with the ‘Wu-Massacre’: Raekwon ,

Ghostface Killah & Method Man. Ghostface doesn’t realise that 4th Disciple has stopped the beat and left the studio booth and continues his assault on the mic but it is incredibly executed.

After Raekwon makes a Street Fighter II reference (Stomp you like that cat Blanka) in the Inspectah Deck produced ‘Visionz’ and ODB demonstrates how he becomes ‘As High as Wu-Tang Get’, U-God finally gets the mic because he threatened to chop off fake MCs arms as a form of ‘Severe Punishment’. Here RZA shows another example of how he was ahead of his time when he stated that as the pendulum swung toward the millennium, wickedness had indeed spread among his citizens. Case in point, 9/11. Nuff said.

Raekwon & Ghostface go Only Built 4 Cuban Linx mode and explain how the ‘Older Gods’ put them on like a lot of us, then the oldest god of the clan comes through..”And as they nervously stared/They saw the coming of Wu/The neon in Times Square/Household name, assassin, killa bee/Mill to the grain, that possess the Wu trilogy…”

Cappadonna, ODB & RZA decide to get explicit with ‘Maria’, but then they put the brakes on and come with real talk in one of my personal standout tracks, ‘A Better Tomorrow’. The Clan warn the people of today to watch what we do in life, as it may show on our younger generation. Tracks like this are timeless and still relevant today, whereas other one hit wonders by over hyped wack so-called rappers that the radio prefer to throw in your face are often forgotten about.

The Clan go from reflecting to celebrating their double CD when they exclaim ‘It’s Yourz’ to their fans the world over. RZA shows shades of his savage delivery that was seen in 36 Chambers: “You fag/You couldn’t pull one drag of my blunt/You couldn’t punch your way out of a wet paper bag/with scissors on your hands…” At this point fans are already blown away from the first disc…now time for disc 2…

RZA had already noticed the transition in hip hop at this point, The Notorious B.I.G. had passed away, and in his death, Puff Daddy & Ma$e emerged on the scene as artists, beginning a new ‘playa era’ in hip hop in the late 90s. They would become the main rap villains then, especially when they snatched the Album Of the Year for No Way Out at the Grammy Awards which triggered the memorable moment of ODB interrupting the ceremony and stating that “Puffy is good, but Wu-Tang is for the children” (That’s how to do it Kanye), and in the 90s, there was an issue about biting other MCs and producers that I feel should stay in force today but unfortunately it is not and it takes away from the creativeness of the art form. Assisted by his seemingly p!$$£d off cousin, RZA and the 9 man juggernaut (10 if you count Cappadonna) brought their ‘Triumph’, a hip hop anthem if there ever was one. If you don’t know at the very least the first few opening lines of Inspectah Deck, you should SLAP YOURSELF now.

So while those happy-go-lucky brothas were poppin’ crystal with their album of the year, Ghostface Killah earned the clan a more credible, prestigious achievemen, the hip hop quotable of the year in The Source. Who can forget his vivid storytelling in ‘Impossible’, his reenacted story based on everyday life in the projects was a stepping stone for him on his journey to becoming the True Wu-Tang star to rival that of Method Man & Raekwon on a street level. Cappadonna continues the everyday life theme on ‘Little Ghetto Boys’, and tells the ignorant that they need to wise up and face their responsibilities. That goes for wannabe internet social media thugs of today. Another example of relevance.

‘Deadly Melody’ sees the clan go ‘7th Chamber’ mode. Method Man protegé Streetlife makes an appearance here, walking into the booth with the Shaolin Strut. But then the clan decide to step back and let certain members shine for solo. This time it is the turn of Inspectah Deck, who also gave his hand of producing beats on this album. ‘The City’ shows the usually laid back Fifth Brother give fans a warning shot of his Uncontrolled Substance: “Composer was shook/I took your bad looks for joke get you back broke/Deep Throat for this murder I wrote/The antidote seeking like a buried treasure/Be every measure lethally inject your whole sector…”

The Wu-Massacre go in ‘The Projects’ for a second time, and Ghostface Killah goes two for two as he finds his book of rhymes that didn’t make his Ironman track ‘Wildflower’, but it was in the ‘Bells Of War’ that we see RZA give his bold statement that the next Wu-Tang album was not coming out until the year 2000, and when that year approached, what happened? The next Wu-Tang album DID come out!

Depending on what version of Wu-Tang Forever you had, ‘Sunshower’ would appear after this, or the end of the album. RZA goes in for solo and while he made an epic fail of promising his fans of his 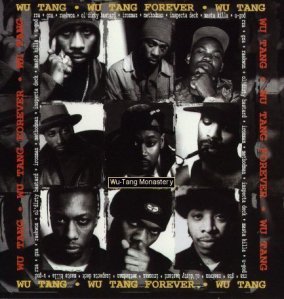 ‘Cure’ album by giving you 6 minutes of knowledge of this track, “Some walk around like they ain’t concerned/with the hell goin on inside the world/why do grown men molest little girls?/Is it because the girl’s breast has swelled/to the size of a woman, although she’s twelve?/The whole world is sick, sick, sick/trapped up in six, six, six…” he also shows the first signs of his Bobby Digital persona “Who’s the colored man?/Who’s the original, Who’s the biochemical/Who’s the grafted digital, digital, digital,digital, DIGITAL?”

‘The M.G.M.’ sees Wu-Tang’s favourite Tag Team tell their story of when they attended a boxing match and showing affections for Chante Moore, then the outrageous as ever ODB drops ‘Dog Sh!t’ on hoodrats and chickenheads and made the Rolling Stones Top 100 songs of all time in 2006. How many Hip Hop artists can say they got that achievement?

Raekwon, RZA, & Method Man start their ‘Duck Seazon’, hunting down wack MCs in their continued quest to chop their headz off, and fans can argue all day what video should have been released from the Clan on this album, and I’m gonna throw this next track in the hat: ‘Hellz Wind Staff’. A vicious Wu-Banga filled with razor-sharp lyrics, and sword swinging samples. If there was ever a visual sequel to ‘Da Mystery Of Chessboxin’, this would be it. There may still be hope, as there was a video released recently for Cappadonna’s ‘Milk The Cow’ from his début album ‘The Pillage’ that was released in 1998. The ferociousness continues as the Clan draw out the ‘Heaterz’. True Master makes his production presence felt here emphatically.

Time to slow it down as U-God goes in for dolo, gets away from his hectic lifestyle and indulges into luxury with the ‘Black Shampoo’. While some fans were a bit on the fence with this one, U-God was showing another side of him that would later be revealed in his solo album – ‘Golden Arms Redemption’ that followed in 1999. The eyebrows continued to raise when Tekitha makes her solo appearance with ‘Second Coming’, heads thought that this sounded out-of-place, not realising that this was the Clan’s way of closing out the album with their statement that Wu-Tang would continue to dominate and bring the ruckus.

Unfortunately for the Clan that didn’t go exactly as planned as the media attacked the Wu for not showing up at gigs, ODB’s trials and tribulations and tried to provoke the Clan to break up not realising that this is not a manufactured group but rather a family, hence the word ‘CLAN’. If there was a gripe I still have about this album today, it would be that I wished the track ‘Tragedy’ made the album due to RZA’s repeated use of the words “Wu-Tang, Wu-Tang Forever” and the emotion driven in the track, but I understand why it was omitted, one, it was dated (RZA says the album was dropping February on the track) and it wouldn’t be right for RZA to have two solo slots on the album, especially when ‘Triumph’, was the lead single. Over the years they showed signs of recovery (Supreme Clientele, Fishscale, No Said Date, 4:21, The Day After, Only Built 4 Cuban Linx…Part II) and continuous tours that would see all members turn up….not to mention their Vh1 Hip Hop Honours award, today they have proved that they have made their mark in the annals of Hip Hop history. Heads look back and listen to this album again after 15 years and see that The Wu-Tang Clan had grown from rowdy young guys to mature wise MCs. and so they really appreciate it for what it truly is: A Hip Hop Classic.