The year was 1999. Me and my fellow brother met up with some older gods in town. They asked us, “who are you feelin in hip hop?” We replied, “Yeah man!!! Ja Rule!!! DMX!!! Jay-Z!!!” They were like “Nah man, you need to check for SV…” “SV? Who are they?” “Slum Village…” “Nah man they sound dry man!!!! Ja Rule!! DMX!!! They run tingz!!” How ignorant and blind we were back then…one day these same older gods pulled me up, and have me listen to some Slum Village. Instantly I was feeling the more mellow sounds, reminiscent of A Tribe Called Quest, before I realised that the great J Dilla was producing for them. Then I saw the music video on ‘MTV Yo!” for ‘Raise It Up’. (that was the name for Yo! MTV Raps after it finished in 95/96). Though my moms joked about the beat being composed on a Casio keyboard, it didn’t stop me gettin hype in my armchair while the VCR was recording! I am so glad when the older gods pulled me up when they did, otherwise my music tastes would have went a completely commercial direction, but they knew that my ear for good hip hop was still instilled in me from when I started listening in the early nineties.

The year is 2011, and my ways of going out had evolved from just goin out and gettin drunk to going to soul dances to going to gigs, and this time it was the turn of Slum Village. Upon arrival I found that a documentary was filmed for Channel 4 showcasing the life of a B-Boy. It was an honor and priviledge to be in the same building as the legend that is Crazy Legs and ‘Ozone’ from ‘Breakin’ fame. There was an amazing display of B-Boy battles that took place, so be on the look out for that documentary when that is aired on Channel 4 over the coming weeks or so.

The capacity crowd turnout unfortunately was not as great as I hoped, maybe either the promoting and advertising was not strong enough, or maybe it was because some fans felt it is not the same without former Slum Village member Elzhi who most recently released his Elmatic mixtape for free download. If you haven’t done so already be sure to download that, a phenomenal tribute to a classic hip hop album that is Nas ‘Illmatic’.

Many thanks to VJ Edoubled and A Few Good Men on the wheels of steel who got the crowd hype with an assault of old school hip hop classics from Rakim’s ‘Don’t Sweat The Technique’, to Wu-Tang’s ‘Proteck Ya Neck’, to A Tribe Called Quest’s ‘Award Tour’, to Crooklyn Dodgers ‘Crooklyn’, to Gangstarr’s ‘Full Clip’. then at 0030 hours, the DJ Young RJ introduces Detroit’s finest onto the stage.

The ovation from the crowd was overwhelming while T3 and Illa J performed classics such as ‘One’, ‘Disco’, ‘Tainted Love’, ‘Fall In Love’, ‘I Don’t Know’, and not forgetting the infectious ‘Players’. While both T3 and Illa J were performing their new material, admittedly the crowd were not showing that same love. Both have solo EPs coming out in June. However Young RJ quickly remedied that situation and ‘Get This Money’ was blasted through The Drum. That track had everybody dancing like they were auditioning for Britain’s Got Talent and straight afterwards the roof got blown off when Illa J answered my prayers and performed the only ‘non Slum Village’ track of the night, the hypnotising ‘Won’t Do’ by his legendary brother. At this point Slum Village turns their attention to the ladies, as they performed ‘Go Ladies’ and requesting them to ‘Call Me’ so that they can become ‘Closer’, Illa J’s crooning wins the ladies over and invites them on stage as they performed ‘Selfish’, though only two ladies actually stepped up, the rest either had cold feet or the respective partners warned them what would happen in their relationship if they attempted to step on stage! The 90 minute set ended with Slum Village defining what love is in their ‘Look Of Love’, and then had the crowd ‘Raise It Up’ in unison.

To summarise, a solid performance from the surviving members, and even though they paid homage to Baatin and J Dilla, there was no mention of Elzhi not surprisingly, and yet the presence of all three were clearly there, along with Illa J showing incredible heart and energy has he bounced around every acre of the stage. It was an honor and priviledge to have a photo taken with them after the show.

This is Mike Dogg representing for you on Unique Heat, and I approve this review! 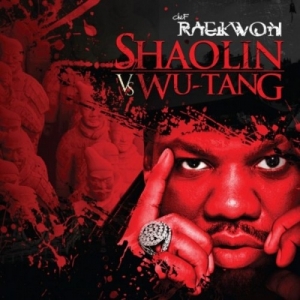 When the Wu-Tang came back in 2007 with their album 8 Diagrams,  it was received by mixed responses from the media, the fans and even the clan themselves. most notably Raekwon, who pointed out that the direction RZA went in his production was not what the fans wanted. So Raekwon went out, and not only did he launch his own label ICEH2O Records, he finally gave the fans what they wanted, that was the long-awaited sequel to the classic Only Built 4 Cuban Linx… but he came back in 2011 again with an album he felt the fans REALLY want.

Shaolin Vs Wu-Tang is a conceptual album filled with kung fu samples start to finish, and that classic Wu-Tang sound that the fans know and love, only without the help of  The RZA  who reportedly didn’t even like the title of the album, funny considering he used the same samples from that very same film in the 36 Chambers album.

The album kicks off the title of the same name. Producer Scram Jones cleverly uses a sample from the film and flips it into a frantic beat. with the intro over, Every Soldier In The Hood finds producer Erick Sermon  on form, and Method Man cursing out cops calling him by his government name.

Arguably the most hardworking Killa Bee in the camp, artist/producer Cilvaringz blesses Rae and Ghost with the track Silver Rings. Raekwon announces here that there will be a OB4CL3 coming in the future, while the late great Ol Dirty Bastard’s presence is felt here with a sample of Wu-Tang Forever’s As High As Wu-Tang Get.

Chop Chop Ninja sees genius production here. sampling a kung fu fight scene from the classic film Shaolin Vs Lama and loopin it up. Raekwon tells a story of a fight he had with a ninja – “He threw a kick at me, I backslapped him, I pulled out the mack/He kicked it out of my hand, how real that?”  acting like a scene in Rush Hour as he continues… “He threw a sword right through his wu- sh!t/Now he throwing stars at the kid, I’m jumping over my car, yo/Trying to get to my glove box and sh!t/Got the door open, gash in my Caesar, my sneakers got red on it/Know that’s blood, he threw a piece of a chain with a long blade on it..” Inspectah Deck guest stars on the track and in Blue Raspberry’s absence comes British born Estelle on the hook.

Next up comes the standout track Butter Knives. RZA taught artist/producer Bronze Nazareth well as the track sounds like it didn’t make the final cut of 36 Chambers album. Wu fans are hoping for a remix that would feature the whole clan, making 2011 sounding like 1993 all over again.

Snake Pond and Crane Style sees Rae go in meditation mode. The two tracks sound like they have merged together in one track the flow is so good, whether that was Raekwon’s intention or not. with Busta Rhymes appearing in Crane Style. It would have been nice if Rae made a joint video of these,  a la GZA’s Shadowboxing and 4th Chamber.

Next up is the triumphant From The Hills. featuring the sensational soul sounds of Raheem DeVaughn, Rae and Meth take on the haterz of the Wu.. Meth responses powerfully… “This The W, the Clan don’t lose, you putting hands on who/Hands down, I can handle you, you half man, half animals /If you are what you eat, and eat pu$$y, you’se a cannibal/And stopping me, is what you can not do…”

Last Train To Scotland features an interesting collabo, Lloyd Banks from G-Unit, whose ring leader tried to defame the GZA about his lyrical content, bear in mind GZA has hip hop quotables for days in The Source. This track originally appeared as a skit in OB4CL2.

Raekwon gives Jim Jones and Lloyd Banks the chance to show and prove, this time it’s the turn of Rick Ross on the track Mollases. Wu trainspotters will recognise the beat from on Bobby Digital’s Throw Your Flag Up from Digital Bullet. Along with Ghostface Killah, Rick Ross surprisingly brings his A-Game, not that he had any choice anyway.

The CD form of this album ends with the epic Masters of Our Fate featuring Black Thought of  The Roots. Using a sample from former British Prime Minister Winston Churchill, salvation was not denied Rae or Black Thought, who claims no one can contend with him.. “When I was pushed out the womb, the Earth spun/The only way to describe this, is to inertia/Some rappers think they can try me, who the first up?/I don’t guarantee no survivors, n!**@$, surf’s up…”

Raekwon, GZA and Killah Priest form a coalition and commit Wu-Crime. That be takin out fake n!**@$ frontin outside of McDonalds. I wouldn’t call it Crime, the end justifies the means…then Rae reunites with Mobb Deep, something we may not have seen since The Infamous album in the track Your World and My World. Havoc comes with consistent production here, indicating that a comeback is in the works for them too, the Mobb Deep we knew and loved in the 90’s. Both bonus tracks are available on iTunes.

Shaolin Vs Wu-Tang is indeed a solid, satisfying product from the clansman, and even though the album remains consistent flow throughout minus Rock N Roll,  he can be indeed forgiven for that stunt he pulled with J.Bieber, after all, Ghostface did collaborate with Eamon and girl group The 411 back in mid 2000s, Method Man did collab with Texas back in 97, even Gangstarr remixed Emma Bunton’s What I Am with Guru jumping on to spit a few bars, are these guys ‘sellouts’? You wanna think twice I think not!! There is no doubt in my mind that this album is a contender for album of the year and in the end, headz will be throwing that W up and chanting for the Wu to come back and reclaim their title 1nce again.